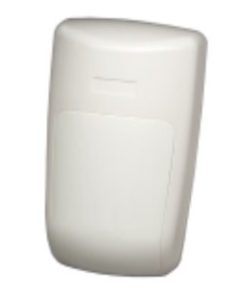 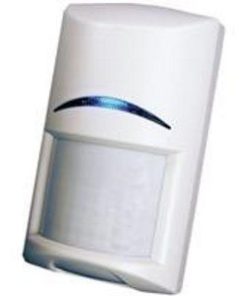 A  motion detector is a key component of your security system because it’s the device that detects when an intruder is now in your home and past your perimeter defenses.  A motion sensor uses one or more technologies to detect movement in an area. If the sensor is tripped, a signal is sent to your security system’s control panel either wired or wirelessly alerting you and our monitoring central station of a potential threat.  We offer many different types and models of motion detectors for use in home security and automation.  The most popular is Passive Infrared (PIR) detectors followed by Dual Technology detectors which combine PIR with microwave detection for extremely low false alarm possibility.

A passive infrared sensor (PIR sensor) is an electronic security sensor that measures infrared (IR) light radiating from objects in its field of view.  PIR-based motion detectors are used to sense movement of people, animals, or other objects. In addition to use with home security systems they can be used with home automation as well automatically activating lighting systems for example.   Most motion detectors are designed to be used when your family is away from home or when no one will be passing through the area “covered” by the PIR.  The obvious exception is when the detector is being used to control lighting which is part of home automation.  The same detector can be used for both security as well as automation however!

An individual PIR sensor detects changes in the amount of infrared radiation impinging upon it, which varies depending on the temperature and surface characteristics of the objects in front of the sensor. When an object, such as a human passes in front of the background, such as a wall, the temperature at that point in the sensor’s field of view will rise from room temperature to body temperature, and then back again. The sensor converts the resulting change in the incoming infrared radiation into a change in the output voltage, and this triggers the detection. Objects of similar temperature but different surface characteristics may also have a different infrared emission pattern, and thus moving them with respect to the background may trigger the detector as well. PIR motion detectors come in many configurations for a wide variety of applications. The most common models have numerous Fresnel lenses or mirror segments, an effective range of about thirty feet, and a field of view less than 180 degrees. Models with wider fields of view, including 360 degrees, are available – typically designed to mount on a ceiling. Some larger PIRs are made with single segment mirrors and can sense changes in infrared energy over one hundred feet away from the PIR. These are used in commercial applications covering long hallways.  There are also models designed with reversible orientation mirrors which allow either broad coverage (110° wide) or very narrow “curtain” coverage, or with individually selectable segments to “shape” the coverage which is useful when heating vents, fans etc. are in the field of view and need to be masked.

When used as part of a home security system, the electronics in the PIR typically control a small relay. This relay completes the circuit across a pair of electrical contacts connected to a detection input zone of the wired home security panel. The system is usually designed such that if no motion is being detected, the relay contact is closed – a ‘normally closed’ (NC) relay. If motion is detected, the relay opens, triggering the alarm.  In the case of a wireless model the relay is connected to an integrated transmitter to signal an alarm or detection to the main panel/control.

Security manufacturers recommend careful placement of their products to prevent false alarms (i.e., any detection not caused by an intruder). They generally suggest mounting the PIRs in such a way that the detector cannot “see” out of a window. Although the wavelength of infrared radiation to which the chips are sensitive do not penetrate glass very well, a strong infrared source (such as from a vehicle headlight or sunlight) can overload the sensor and cause a false alarm. A person moving on the other side of the glass would not be “seen” by the PIR. That may be good for a window facing a public sidewalk, or bad for a window in an interior partition. It is also recommended that the PIR not be placed in such a position that a heating or cooling vent could blow hot or cold air onto the surface of the plastic lens which covers the housing’s window. Although air has very low emissivity (emits very small amounts of infrared energy) the air blowing on the lens cover could change the plastic’s temperature enough to trigger a false alarm. Many sensors are  designed to “ignore” domestic pets, such as dogs or cats by setting a higher sensitivity threshold, or by ensuring that the floor of the room remains out of view (called masking). Since PIR sensors have ranges of up to 30 feet, a single detector placed near the entrance is typically all that is necessary for rooms with only a single entrance.

Many modern motion detectors use combinations of different technologies. While combining multiple sensing technologies into one detector can help reduce false triggering, it does so at the expense of reduced detection probabilities and increased vulnerability. For example, many dual-tech sensors combine both a PIR sensor and a microwave sensor into one unit. Microwave detection is based on doppler radar and works very similar to a radar speed gun.  Where PIR sensors can not see through glass or walls, microwave sensors can and this can be an advantage in many applications such as large warehouses.   For home security use microwave detection alone is generally never used because it may detect motion beyond the intended protection area (outside the home). When packaged as “dual tech” for motion to be detected, both sensors must trip together. This lowers the probability of a false alarm since heat and light changes may trip the PIR but not the microwave, or moving tree branches may trigger the microwave but not the PIR.  If an intruder is able to fool either the PIR or microwave however, the sensor will not detect it.

We generally only use DualTech motion detectors in warehouses. This is for multiple reasons. First the PIR (only) models we carry offer great intruder protection while being extremely false-alarm resistant.  Second they are lower cost than Dual Tech which do have a higher resistance to false alarms, but are rarely needed in the typical home setting.  Third we wonder about having microwaves beamed at your family 24×7.  While there is little medical evidence regarding risk, we err on the side of precaution!

Note:   Some of the above text was excerpted from the Wikipedia article “Passive infrared sensors“, which has been released under the GNU Free Documentation License.