From the professional installation side of our business the new Qolsys IQ Panel 2 Plus is with a doubt our “go-to” panel when upgrading customers with lots of existing wireless devices.  We frequently come across customers with older Honeywell Lynx Plus or Lynx Touch wireless panels, or even Vista hardwired with wireless sensors added on that are looking to modernize.  The same goes for customers with  Interlogix/GE Simon XT, 2GIG Go!Control (GC2), or DSC Impassa systems, all very popular in their day.

Qolsys has introduced an enhancement to their already successful IQ Panel 2 adding PowerG wireless capability but more importantly compatibility with many popular legacy wireless formats.  The new product is called the IQ Panel 2 Plus. While we loved their original IQ Panel 2, the new Plus model adds some powerful upgrade features.  First is adding DSC’s PowerG wireless capability for super long range sensor protection.  Now that DSC (or more correctly Johnson Controls) has acquired Qolsys adding PowerG to the Qolsys lineup was a natural.  Rather than the normal 100-200 feet range most RF wireless sensors can be seperated from their control panel without a repeater, PowerG has a maximum range of 2000 feet!  This is perfect for homeowners with detached garages, sheds, thick interior stone walls etc. where traditionally wireless without a repeater was problematic.  Of course security was designed in so these sensors utilize 128-bit AES excryption making PowerG one of the most secure in the industry.

Out of the box the Qolsys IQ Panel 2 Plus has WIFI and 4G LTE cellular buillt-in.  You can choose between AT&T or Verizon models.  As with the earlier Qolsys panels Alarm.com is their chosen interactive services partner to remote control security, home automation, as well as video surveillance devices such as cameras and video doorbells.  Using the built-in Live View capability you can answer your door right from the 7″ touchscreen using an Alarm.com Skybell video doorbell.  Have a Z-Wave lock?  Then you can unlock the door from the keypad as well.  Of course all of this is possible from the Alarm.com mobile app too.

For home automation the IQ2+ is Z-Wave Plus compatible which opens up the world to the thousands of Z-Wave devices on the market.  You can ad up to 232 Z-Wave home automation devices such as lights, locks, thermostats, even Z-Wave sirens.  You can control these devices right from your keypad or via the Alarm.com app assuming you sign up for the Interactive-Enhanced plan which adds home automation control.

From a panel configuration/programming point of view the Qolsys IQ2+ has the most straightforward navigation.  Definitely the easiest for DIY homeowners.  Of course SafeHomeCentral offers free remote programming as well but Qolsys has always been the quickest and easiest to setup.  The panel can be mounted on a wall or you can use the included “kickstand” allowing you to just place the keypad on your kitchen countertop or desk and plug the panel into a nearby AC outlet.  The panel has a 24hour backup battery included. 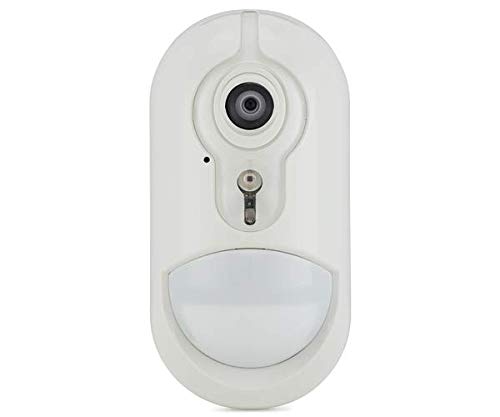 The classic IQ Panel 2 could use Alarm.com Image Sensors which are motion detectors with a built-in camera which can take several snaps when an alarm is triggered at the motion detector.  However the PowerG daughter card uses the same slot as the optional Image Sensor daughter card in the IQ Panel 2 Plus.  But DSC offers a PowerG Image Sensor that works with Alarm.com so all is not lost!  And speaking of cameras the Qolsys IQ2+ has a built-in 5MP camera on the keypad which can take pictures upon disarming or during an alarm.  There is also a software driven motion sensor that can use the keypad camera to detect pixel changes (movement) when either armed or disarmed.  The latter is useful for presense detection for older users so love-one can check to make sure they are up and about.  There is also a software driven Glassbreak Detector as well which utilizes the microphone in the keypad as part of the two-way voice feature.  This is used to talk with a central station dispatcher directly via the keypad since the keypad has both a speaker and microphone.

Because legacy wireless devices can be used, depending on which model you purchase, there are hundreds of potential security devices that can be used with the Qolsys IQ Panel 2 Plus.  This includes wireless security sensors from Qolsys (319.5Mhz), GE/Interlogix (319.5Mhz), DSC (433Mhz), DSC PowerG (915Mhz), Honeywell 5800 (345Mhz) or 2GIG (345Mhz).

Qolsys also sells the IQ Remote which is a WIFI connected 7″ secondary touchscreen.  You can add up to three IQ Remote keypads to your system giving four total keypads when including the actual IQ Panel 2 Plus.  They look just like the main panel, also have an integrated camera on the front and will chime/talk as zones open (when chime mode active).  Frankly we find them pricey but they are the best looking remote keypads out there.  Just need to supply power to the included AC transformer.  Can be wall mounted or use the included kickstand just like the IQ2+ main panel.  Oh and also has its own rechargable backup battery inside. 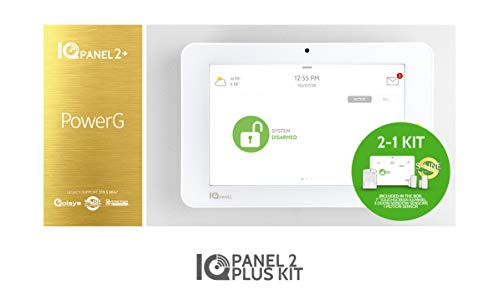 Overall the new Qolsys IQ Panel 2 Plus is a great panel.  If not upgrading from an existing wireless panel you can order the Qolsys 319.5Mhz model since it comes in kit form with two encrypted wireless door/window sensors and an encrypted wireless motion sensor.  While the panel in the kit includes the PowerG daughter card the sensors with the kit are not PowerG transmitters rather they are Qolsys S-Line 319.5Mhz sensors.  Just add on any addition al sensors you need and you have one advanced, but easy to install professional grade alarm system!